What a flashy mob!

Over 40 Phoenix athletes, from all age groups, responded to the call for a flash mob at Preston Park parkrun on Saturday 29th October. We finished with lead runner, ten in the top twenty and 12 PBs.

First home was Max Pickard in 15:37, a meaty minute and a half ahead of the second placed runner. Alex Cruttenden was 3rd, Jonny McCormack 4th, Ash Dorrington 6th and Paul Weir 7th.

What you may ask is the point of a flash mob? First of course is that it's great fun but it does raise the profile of the club and there was certainly a buzz around the event with quite a few fellow runners asking who? how? what?

And, of course, sunlight reflecting off of all those white vests looked pretty impressive.

What a mob you are!

Keep an eye out for the next one. 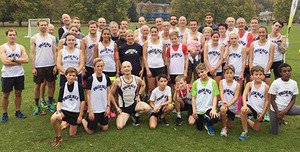