Will started as a twelve year old back in October 2009 and has been by far the most prolific Phoenix participant. Think about it – 300 park runs amounts to fifteen hundred kilometres of speed work and an average of 43 runs a year. Back in 2009 his first run was in 28:59 and he has been improving steadily ever since. His pb at Hove came only a few months ago when he ran an impressive 19:50.

He can be spotted at any of the local park runs and occasionally further afield. His pb on Hove Prom is 19:45 and at Preston Park 20:08

Will does not confine himself just to parkrun and last year was junior Sussex Grand Prix champion. 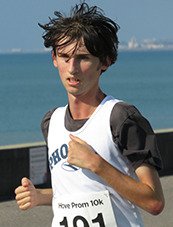 « Be your best....it might just be good enough!! Barnstorming Duo »