Finn McNallywho is only in his first year as an Under 20 athlete, became one of the youngest ever winners of the annual Boxing Day race inBrighton's Preston Park.

Finnhad kept pace with established seniors Brighton & Hove's Matt Bristow and Chris Thomson but managed to outrun them on the final lap clocking 29:29 to beat Thomson, who clocked 29:33 by twenty yards with Bristow a further fifty yards adrift in 29:42

The race format invites you to complete 1,2,3 or 4 laps and Phoenix were also prominent in the shorter events with Max Pickard four minutes ahead of second placed Gary Thayre in the three lap event and Charlie Grice winning the two lap event. There were fourteen Phoenix athletes in total. 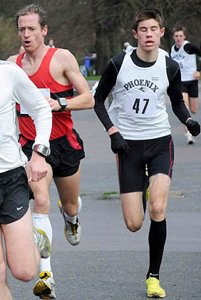