This was Rachel's first attempt at the ironman distance. Her swim went well and the bike was going OK until coming off whilst trying to grab a water bottle at one of the feed stations. However she was soon helped on her way again, a bit grazed on the shoulder and handle-bars on the bike not quite in line. Determined to finish Rachel started the run feeling good. All was going well till 32km on the marathon when a right knee problem meant that Rachel was doing the ironman shuffle.

And here are a few of Rachel's thoughts."To say I felt great when I finished would be a lie - I felt TERRIBLE!!!!! So I am now an Ironwoman! I had an amazing day and now it all feels rather surreal. I would totally recommend the race to anyone. I felt great after (after the drip!).
Will I do another one.....?
I think so. Well now I have finished, next I need to go faster!!!!"

Lizzy was in Kona, having qualified with her AG win at the Monaco 70.3 in 2008, preparing for the big day.

3.30 am for race morning breakfast!

According to Lizzy the swim was a "washing machine". A 63min swim and still in one piece saw her in 13th for AG.

On the bike it was not too windy "Overall I found the bike ride easier than when we did the training ride back from Hawi, and despite 5:47 being quite a bit longer than what I had hoped for, it went by really quickly. In restrospect I probably could have gotten away with pushing a bit harder, but better to be safe than sorry."writes Lizzy. She is up to 12th

On to the run. Due to an injury Lizzy has not done as much run training as she would have liked and so started out conservatively. Recalling the finish, Lizzy wrote"I came down Alii Drive when the sun was a huge orange ball over the pier. The atmosphere was amazing and I just took it all in, clapped people's hands, and crossed the line with a huge smile on my face. Run time was 3:52:55 and pretty evenly paced which given the course, conditions, and shocking training stats is incredible and a marathon PB" 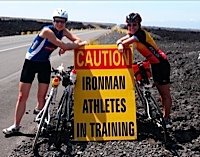