Charlie on a mission

Charlie on a mission

Charlie Grice has got off to a flying start in the indoor season coming third in the Indoor International at Glasgow last Saturday and seventh tonight at the International Athletics meeting at Dusseldorf.

Glasgow International, in which athletes from Great Britain, Scotland, USA and a Common Wealth select team compete, saw an exciting 1500m race with Charlie sticking to the leader Chris O'Hare until the final strait where he was piped at the post to third. With just seven one hundredths of a second between first, second and third you could say there was 3 golds!

Dusseldorf International tonight saw Charlie compete against Athletes from all over the world , including reigning Commonwealth Champion Silas Kipligat. Charlie refused to be intimidated pulling out a personal best of 3:40:97 - a World Indoor Qualifier. 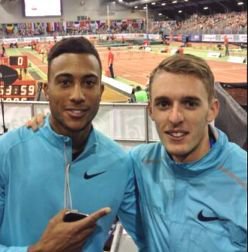