This weekend was a fantastic result for our atheletes Malcolm Hughes and Sean Scott at the Goodwood Duathlon. Despite the cold weather Sean managed to power through the cold to an overall win by over 3 minutes.Malcolmdidn't let the weather dent his race either with winning the supervets cateogry.

Malcolm has been kind enough to to provide us with his race report for they day, enjoy!

The temperature on the morning of Sunday 24th March was about +1 Deg C, but with a strong NE’ly wind blowing it was feeling about –5. On the plus side it was dry with only a small chance of snow flurries. The race was held at the 3.8km Goodwood Motor Race Circuit so fairly flat but really exposed to the wind. I decided to wear 2 trisuits over a long sleeved base layer and then arm warmers as well.

The race started at shortly after 10am with a 1 lap run. Sean went off fast with the leaders and I settled into what I hoped would be a sensible pace and by half a lap I had started to pass 1 or2.

Transition was in the pitlane. The leaders were well gone but I managed to gain a few more places there. It was a 10 lap bike and would normally be quite quick but the wind at the back of the course was brutal, meaning that only the winner, Sean, and 2nd broke the hour. My pace at the start of the bike was just under the hour but as I got colder and the wind felt stronger I dropped about a minute a lap for the last 3. T2 and for some reason I took my gloves off? 2 laps for the 2nd run. Sean extends his lead to win by over 3 mins. I have some difficulty getting going as I am cold after the bike and soon get passed. I decide to stop to give my complaining hamstrings a bit of a stretch. This does the trick and the rest of the 1st lap is warming up for the 2nd. There are plenty of runners on the course to chase, most of them doing the short race. I did close the gap to the runner ahead but there was too much lost at the start of the run to get back.

At the finish the was a very welcome cup of hot chocolate recovery drink.

Overall a good day for Brighton Phoenix; the Winner and another top 10 for s/vet win, for which I am very happy. 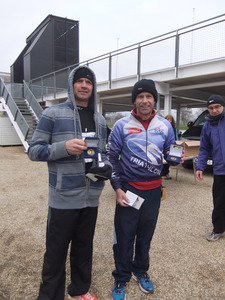 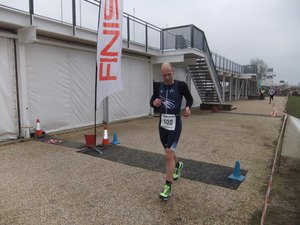 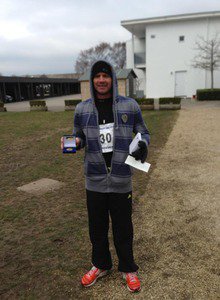