U17 boys triumph at Southern XC

The under 17 boys achieved a fantastic bronze team medal at the South of England XC Champas at Parliament Hill on Saturday 16 Feb. Jon Pepper, now running first claim for Phoenix was the other star of the day coming 4th in the senior men's race.

Sam Kitchen used his 400m speed to hit the front early and sustained the
lead for the first kilometre. Although he never expected to maintain a high
position he would have expected to be higher than his placing of 112th but
he sustained two falls in quick succession and showed real determination to
complete the race. (see photo at bottom of page)

The U13 Girls team were placed a creditable 10th with all our runners
competing at this event for the first time.
Almi Nerurkar 29th
Naomi Fonteyn 59th
Charlotte Matthews 78th
Chloe Watson 79th

The U15 Boys only managed to field two runners:
Archie Davis 22nd
Ollie Johnson 150th
Both boys are at the bottom end of the age group, so impressive runs by them.

Megan Bradford was our only runner in the U20 Womens race and she had a fine run
to come in 39th place.

In the senior races, the date change again meant some drop outs from club representation but there were some terrific results.

Last year Jon Pepper came third in this event running for his then first claim club. Having switched his allegiance to Phoenix he ran superb race in the white vest to take fourth spot in 50:07. There is a further link with the club in that the race was won by Frank Tickner, brother of Phoenix second claim runner Ben. His time was 48:10. Stuart Pal was the only other Phoenix SM. He ran a very respectable 69:54 in 323rd place. 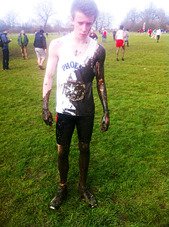