Even before the senior men’s race got underway, the anticipation was at fever pitch as to whether Phoenix would be entering their crack team for this event – not to disappoint the organisers and the other teams, we were!

Before the race, it had been confirmed that Hastings AC had puttogethera very strong team that in most years would be right up there for the win. Brighton were also going to be as solid as ever, having numbers on their side. However, Team Phoenix were in no mood to mess about, with a chance to take down the incredibly tough course record of 58:57 owned by the old-school Phoenix team that averaged just under 9.50 per leg when it was set 16 years ago. To put that into context, that’s 5 seconds faster than the quickest overall leg last year run by Josh Guilmant. It was a mammoth task to take on.

Opening up on leg one were Will Durkin (A team) and Sam Wade (B team). It was an incredibly tight call on who would get the nod between these two class athletes for the A team place, with Will just shaving it. Running C teamfirst legwas Robbie Fitzgibbon (U17). As the gun sounded they headed off on the one large loop of the grounds of Christ Hospital School.First to reappear at the turn for the finish was Max Thomas of the Hastings club with Will just ahead of Sam, closing in times of 9.57 and 10.02. The tense head-to-head seemed to bring the most out of the them on the day, giving Will the top U17 time. He later confessed that he had had nightmares of Sam taking him on the line, having been given the A team spot. Sam’s time was a massive 30 seconds faster than last year, and he is certainly the biggest improver in the team this year with his heavy triathlon training paying off.

Taking over on second leg and 10 seconds down on Hastings was the reigning Southern Cross Country champion, Ben Tickner, and he was in no mood to do anything but hammer it, having got to the race some 3 hours before the start just to focus. As he set off it was like an animal being set loose from its cage and he started hunting down 1500m specialist Andrew Woods, going past him before he exiting the school grounds. If Ben was a dog he most probably would be half greyhound half husky, as he has the speed to go out fast and hunt down his prey and then just keep going in devastating fashion. As he came into the home straight he was determined to push all the way to the line, just as in any track race – an art lost on many road runners today. His time was a huge course record of 9:19 – smashing Phoenix old boy Steve Harris's 16-year-old mark of 9:27. The thoughts within the team when they heard what Ben had done were 'right now let’s take down that team record'.

Third up was Max Pickard, who has progressed massively over the winter, establishing himself as a more consistent performer at top county level over the cross country scene. Max would have wanted more, but 10.06 was good enough on the day. At this point the B team were making sound progress switching from 4th to 3th spot. Jose Luceron Munoz (10.36) and Jake Elliott – returning to form with10.29,the second fastest U17 time of the day – kept the team in the mix for the medals. Up until this point the C team had also been making steady progress; with a mix of youth and new members in the team, it was always going to be interesting to see how they fared. Robbie, having returned to form in training, ran a well-judged first leg to come home in 11.04. This was matched by Tobbias Bremer making his debut for the team with 11.11 – a very good run for someone who has never run the short distance before, and no doubt he will be looking for a strong summer season. Will Thompson was the surprise package of the day with no real form going into this race, it was going to be interesting to see what he could run. It turned out very well, with the 3rd fastest U17 time of the day: 10.49. An all Phoenix lock out of the U17 times.

Back at the front of the race the A team were about to put the chasing teams further into the hurt locker, with Charlie Grice stepping into familiar territory. A middle distance two mile specialist, he set off looking to improve on his 9.56 from last year and came home in a very impressive 9.41. At the age of 18, this looks likely to be revised further. Stalwart of the club James Miles running 4th leg for the B team gave a strong performance to hold the team in the bronze medal position with Hastings AC slipping out of the medals with their 3rd leg athlete taking a wrong turn on the course and disqualifying the whole team. Robin Fitzgibbon closed out the non-scoring C team in 11.22, setting himself up nicely for the marathon next week.

Even without the pressure from Hastings, there was no letting up, as Josh Guilmant upped his game to deliver a classy 9.49. Darryl Hards (10.20) delivered the same kind of constitency for the B team that has led to bronze medals being picked up in the last two team races, extending the gap over the chasing Lewes team by a full minute.

Last up Jon (Duracell Rabbit) Pepper, 'high on mileage' for his marathon preparations, stepped up to the plate to unleash some pent-up aggression from the previous week's Reading Half Marathon where he was sent the wrong way and lost out on a possible 64m clocking. Jon metronomically kicked out the pace to bring the team home in a massive course record of 58 27, some 30 seconds off the previous record. His was the second fastest time of the day: 9.35. Dan Stepneycomfortablybrought the Phoenix B team in for bronze, with Brighton taking second. With their best team for many years, they were still a massive 3 minutes adrift. Matt Bristow must be credited with putting together another strong Brighton team as he stands down as captain of his club after 10 years of service. Well done Matt.

Not only were two course records broken in the senior race, but if you had taken the 6 fastest times from the other clubs and put them in one team they still would not have been within 1 minute of the time run by Team Phoenix. The question now is how long can this record last for? Success breeds success and the reason this record went in such dramatic style is that we have groups that train together and push each other on to better themselves every day.

The Senior women had a good day's work coming home 7th team. Paule Kremer, who has only been running competitively for a year, was given the task of leading the team out with a strong leg of 13.54 – quite different to the marathon and triathlon training she has been doing. Liz Durman showed she is getting back to fitness with 13 minutes flat, before Captain Erica Martin moved the team up with an impressive 12.20.

Quenton once again put together the strongest team in Sussex, matching whatever the seniors were able to do, with another gold medal. There was a welcome return for Matt Berridge as he got the race under way for the A team with a strong 6.17. Max Winter and Joe Lillee both had good runs for the respective B and C teams on leg 1, showing that there is strength and depth in the squad, where they all can drive each other forward. Harry Swindells put in a solid second leg to keep the team in the mix, with Archie Davis showing Ben Tickner how it is done at U13 level – setting a fantastic course record of 5.46 to hold off a strong Lewes team by 8 seconds. The B team closed out in 8th place with Joe Kelly and Ollie Johnson matching Max’s time. Jack Etherton and Charlie Warren also ran well for 14th place in the C team.

It was great to see the U13 girls field a full team for these races and they did fantastically well – just missing out on a medalby 8 seconds –with a 4th place finish. Elorah Mann 7.20, Naomi Fonteyn 6.59 and Almi Nerurkar 6.54 showed that with just a little more work, they will be a medal threat next time round. Well done too to the B team – Chloe Watson 7:04, Kate Grandlund 8:24 and Natasha Rodinguez 7:39.

Jody Mann showed real determination and class to make sure Phoenix finished a team in the U15 girls race. With a late team drop out, she ran two legs. She opened with 7.23 before Sasha Clarke took over on leg two with 7.46. Jody then ran 8.03 for the last leg.

The U15 boys had an outside shot at a medal here and they did not disappoint. Will Russell ran leg one– quite a bit shorter than the Hove Park run he is used to –in 7.01. It was then up to Sam Kitchen to move through the field to try and set Billy White up so that he would be in striking range of the medals. Billy this year has been on fire in the county and even though they were down in 7th place they still had a shot. The number of athletes Billy had to pass must have helped, as not only did he get the team into 3rd place but he gunned down the course record by some 10 seconds in 5.16!

Phoenix men vets have strength in depth at the moment and full teams were entered in each age category. They were rewarded with silver medals for the O60s, bronze for the O50s and an excellent fourth place for the O40s.

The 60s and 50s ran first. O60s were defending champions and fielded the same team as last year: Malcolm Kemp (13:08), Terry Avey (13:04) and Andrew Field (12:59) all improved their times significantly for second place behind a full strength Brighton & Hove team.

The women vet's team unfortunately had elected to run in the senior race, placing 14th. Had they been able to run in their own respective race they would have finished 4th. Anita Jones, Carol Webb and Liz Halliday constituted the team with strong runs by all three. It would have been interesting to see what they would of done had they run in the vets' race. Maybe a medal could have been snatched. 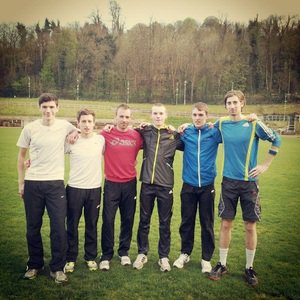 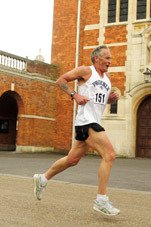 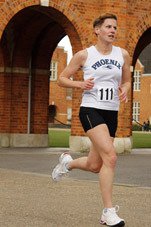 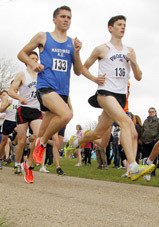 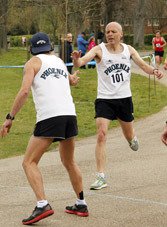 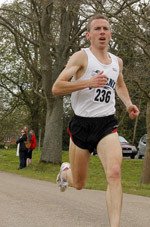 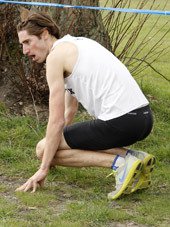 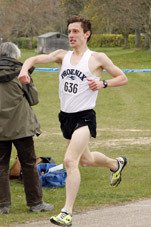 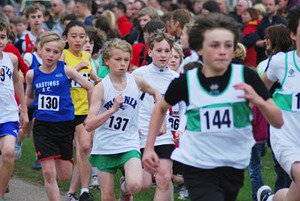 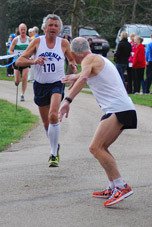 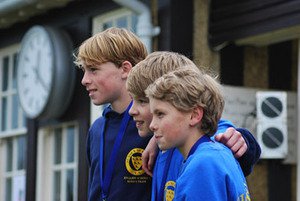