Phoenix athletes start in all races at Bexhill.

With the Sussex championships the previous week and the Sussex Masters and Schools Championships on 21st January and the Southern x-country races on 28th, making the trip to Bexhill for the third county cross country league race on 14th January was a low priority for some athletes. Despite this, Phoenix managed to field athletes in all races with individuals and teams consolidating their league positions.

On a course that is renowned for being muddy, conditions underfoot were good and although cold there was little wind, ideal racing conditions.

As always the races started with the U13 girls and good runs by Charlotte Mathews(14th), Claudia Betts(18th) and Elorah Mann(19th) resulted in the team finishing 5th.

Despite two Phoenix runners having problems during the race, the Phoenix U13 boys A team only finished 1 point behind Hastings. This leaves them 5 points clear in first place in the league, which should make for an exciting last race at Lancing. Archie Davies followed up his previous weeks victory to come home in first place and was backed up by Harry Swindells (8th) and Isaac Wright(11th). The B team of Joe Kelly(15th), Charlie Warren(25th) in his first race for Phoenix and Joe Lillie(26th), did well to finish 8th.

In the U15 girls the ever present Jody Mann put in another fine effort to finish 16th.

Billy White once again dominated the U15 boys and with good run from Sam Kitchen in 5th and another fine effort by Will Russell in 29th the team finished in an excellent second place.

William Thompson was the first Phoenix runner in the U17 boys race with an excellent run sandwiched between two Brighton and Hove runners to finish in second place. Despite a problem at the start leaving him some way behind the field, Robbie Fitzgibbon ran a sensible race slowly picking of runners to finish a commendable 10th

It was pleasing to see the senior ladies start five runners. In a large field they were led home by Catherine Bounds in 18th place with Lizzie Durman in 24th, Anita Jones 27th, Paule Kremer 38th and Lesley Fairbairn 52nd.

Following their championship performance and mass turn out the week before the senior men were down in numbers but still managed to field a full team, although four runners were masters. Despite this they managed to finish in 5th place, which should consolidate their position in division one. The team was led home by Gary Thayre, who is returning to fitness and had a good run to finish 28th. He was backed up by Alex Bonzi in 34th, James Miles 37th, Nigel Herron 41st, Lance Bellers 63rd, and Andrew Chapman 69th.

Well done to all those that competed and supported. The final league races are at Lancing Manor on 18th February. 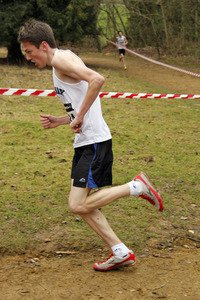