Under 13s out in force at Plumpton

The under 13 girls look like rivalling the boys in that age group and turned out in record numbers for the second cross country league race in Plumpton. Six of them ran (two teams) and, remarkably, this was the first cross country race ever for four of them. Elorah Mann was first home in 13th place with Charlotte Matthews (19) and Claudia Betts (20) completing the A team scoring. Ella Grabsky, Alex Vidler and Isabelle Whitelegg then followed up in strong support . There are 17 teams competing for honours in that age group and Phoenix are placed in a healthy fifth place.

The enthusiasm for cross country seems to have grabbed hold of the entire club. The under 13 boys fielded no fewer than 9 runners (Archie Davis and Matt Berridge scoring their familiar one two followed by Sam Betts, Reuben Hoyte, Harry Bartley, Oliver Johnson, Harry Swindells, Joe Lillie and Jack Etherton) and are in gold medal position after another fantastic performance. Senior men and vets had 14 on the start line (Ben Tickner first and Josh Guilmant third) and, most encouragingly, there were eight competitors in the women's race. Catherine Bounds was first home in an excellent run for 14th place. 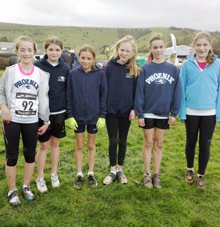