As the track season draws to a close and the dark nights threaten to return, four of Team Phoenix middle distance athletes decided to travel up for a final run out over the 3000m distance at Watford. The athletes in question have all been in great form this year; with Charlie having near domination of the domestic middle distance scene, he would be taking on the longer distance for the first time in two years. Josh finally putting in a 14 30 clocking in the 5000m would be stepping down and trying to lower his time the third successive 3k race in a row before calling it a day. While both Finn and Max had unfinished business, having not hit the times they are capable of over this distance.
The race went off at a fair pace with all four in early contention, it was not long before Charlie took the lead and slowly increased the pace with a real push for home in the final two laps finishing with a winning time of 8.21 (PB) and with far more there for next season. Josh came home in a respectable 8.30 some five seconds adrift of his PB with Max having his best run of the season in 8.34 smashing his PB, and Finn returning to form also hitting a PB of 8.38. 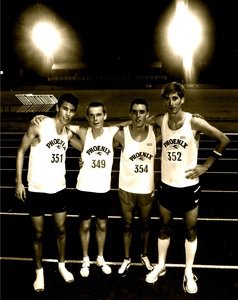